The selection you make for bulls for the next generation of calves will be the most important decision you will make concerning your future in the cattle industry. This bull with his genetic potential holds the keys to make a profit and a living in the cattle industry and build a concentrate gene pool that will assure you of continued success. Or you choice if improperly made and settling for second best will not allow you to progress and will leave open cows to be culled unduly.

This writers intended purpose in presenting the following information is to make available information of specific nature, which will allow you the opportunity to satisfactorily determine if the prospective bull you are about to select is fertile, sub-fertile or sterile and get your cows pregnant on time. Also allow you to produce the type of cattle the consumer or breeder is searching for.

We have all seen a lot of cattle, but what do we actually "SEE"? As Bertillon, the famous French detective once said, "One can only see what one observes and one observes only things which are already in his mind. My purpose is to put bull fertility selection knowledge in your mind by observing the hair and other masculine features so you can make a valued decision about a bull before the semen is drawn and then the final decision can be made.

I want to put some thoughts before you that will allow you to know before you semen test a bull if he will pass the test and get most of your cows pregnant in the first 21 days. (IN SHORT BULL SINCE).

Once the decision on a herd bull has been made there is a great demand upon his reproductive performance. The requirement on him may far exceed his reproductive capabilities. Late calves or open cows cause great economic losses. The cattle industry experiences more open cows because of low fertility in bulls than any other one factor. Most seed stock breeders keep every bull for sale to commercial cattlemen unless he is so bad that he knows no body would want him at any price. A one percent increase in reproduction is worth twice as much as a one percent increase in price. What if you increase the reproduction in your herd by 10%? (BIG BUCKS)

One of the most desirable features one should look for first is the coarseness of the hair about the head, face and neck of the bull. The hair shafts should be coarse in appearance and touch. Looking closely you will notice the hair per square inch is moderate in amount. You will notice the hair is generally all in a downward direction except over the eyes.

Exhibition of coarse and curly hair about the head, face and neck of the bull assures the looker of the highest degree of fertility. As the bull matures and reaches his highest sperm production the hair will become more tightly curled. Test the curly hair by pulling a curl straight and it will return to the tight curl. This bull will settle (get the cows pregnant) 80% to 90% of his cows in the first 21 days of the breeding season. This bull live count should be in the 80-90 percent live range. If you collect and freeze semen on this bull you will get a 10-15 percent reduction in conception because of the stress in the freezing process. This bull will be the most likely candidate to produce sons when mated to great cows that will replace himself. This bull can lend himself to the cow to allow her to express herself. This bull will be the most likely candidate for building your future in the cattle industry. Seed stock or commercial. See figure no 3.

Exhibition of coarse and wavy hair about the head, face and neck. This bull will also be a highly fertile bull. His live count should be in the 75-85 percent range. this bull should get 75 to 85 percent of his cows pregnant in the first 21 days of the breeding season. If you collect and freeze semen on this bull the breeding results would be 10-15% less than natural service because of the stress in the freezing process. See figure no 2.

Coarse, straight hair about the face, head and neck of any breed of bull is a desirable trait to have and denotes a high degree of fertility. However a slight degree less than the two above mentioned bulls. This bull should have semen in the 70-80 percent live range. This bull should get 70-80 percent of his cows pregnant in the first 21 days of the breeding season. Using frozen semen from this bull will result in a 10-15 percent less conception than natural service because of the stress in the freezing process. See figure no 1.

DOWNWARD FOLDS IN THE NECK SKIN

The skin covering the head, neck, and shoulders of the high fertile bull will be thicker and will have deep crevices or folds running vertical from top of neck downward to bottom of neck. The skin should be loose, thick and movable. See figure no 10.

If something has happened to decrease the fertility (reduction in testosterone (reduction in sperm production) of the bull, within a short period of time (10-14 days) the hair on the poll will began to stand erect. For a bull to advance from the coarse curly, coarse wavy or coarse straight hair to the thick silky feminine hair, can take as much as 6 months. However one should be aware of the fertility problems that are present in the bull and take action. If this condition persist the hair on the poll will get long enough to lay down and look like the lady from the beauty shop that has her hair designed for the long bang look. Most cows have long hair on the poll or the bang look. (A feminine trait). As the condition progresses the coarse hair will give way to finer, thicker, silky hair as the cow possesses. A close look at the hair may indicate the hair is flowing in many directions and long hair on top of neck. A bull should never have long or silky hair on top of the neck as the steer does. Yearling bulls that have not reached sexual maturity will exhibited the finer silky hair. Most yearling bulls that have not advanced beyond that point will probably never become a great breeding bull. See figure no 4.

The poll hair covering of the bull should be observed on a regular basses as you walk through your cattle. The hair on the poll should be coarse and curly, coarse and wavy or coarse and straight. Never standing erect. The poll area will be the first hair area to change if a fertility problem (reduction in testosterone and sperm cells) should arise in the bull. The hair will began to stand erect (vertical) on top of the poll. After the hair has grown to a length of 1 inch or more the hair will look finer and began to lay down with the bang look. The hair will begin to change from the pool downward and back to the fine and silky look. (see below)

NECK VEIN OR CREST ON NECK.

The crest is a masculine feature that increases in size as the bull matures. However for the young prospective herd bull prospect he must have a heavy crest started at 12-14 months of age and a short neck. The bull that does not have a nice crest started at 12 months in most cases will have a small scrotal and will be a low fertility bull. He most often will not become the kind of herd bull needed for great progeny. If a bull develops a fertility problem (reduction in testosterone & semen production) the crest will began a gradual decrease in size. You will notice other features changing at the same time.

THE TAIL OF THE BULL.

THE SCROTAL OF THE BULL.

The function of the scrotum is to cover, support and protect the testicles and to maintain the lower than abdominal temperature. Internally the scrotum contains the Datoris Muscle, which is a sheet of muscle elasticity necessary to maintain the proper temperature of 98.6 degrees .The scrotum sack should look like buckskin leather and dark in color not white. Only very thin silky hair should be tolerated on the scrotum. Any hair more than mentioned denotes infertility. When an impediment occurs to reduce the fertility, the hair covering on the scrotum will began to change. The hair can become thick and long or in some cases the hair will cover the scrotal the same is the regular hair covering the hide. The hair will become much more dense and will lengthen to two – three inches in length. The increase in hair will increase the temperature in the scrotum above the 98.6 degrees. The requirements for the scrotal in the yearling bull should be 38 to 40 centimeters and with a length of 6 to 7 with no tolerance. Larger than 40 and smaller than 38 are both in the extreme and should not be tolerated.

The primary function of the testicles is to produce normal, mature sperm cells in sufficient quantity to insure conception in the female. They also produce the male hormone testosterone, which is responsible for the sex drive or libido in the male and is needed to maintain the functional ability of the reproductive system. It is mandatory that both testicles are exactly the same size, shape, length and tone (degree of firmness) with a well-developed epididymis at the bottom of the testicles. The epididymis should be the same firmness as the testicles. It is of up most importance that these three factors be exactly as presented. The size and shape of the testicles of the bull at a specific age is also of up most importance. See chart listed. The acceptance of any tolerance below the optional will result in a lower pregnancy rate. The two testicles must have the shape of a football (no tolerance). See illustration no 5.

There are many shapes and forms of testicles that appear to be near normal. Upon examination with the use of measuring and visual appraisal with testicle in hands you can see the malformation or degeneration. Any shape tolerated other than normal should be treated as any other bodily or structural defect and should not be used. The tolerance of these kinds of defects will be passed on to the progeny that is produced and will become problems to be over come in future generations. 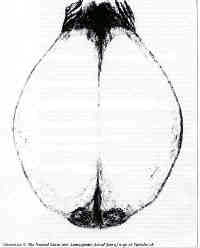 The length of the testicle is as important as the circumference. A smaller than optional scrotal circumference and shorter than optional length will give a higher amount of abnormal and defective sperm cells. This bull should never be tolerated. He should be placed in a less than optional category for breeding. See figure no 40f.

The pictures are the many shapes with definition and defects that are present in our bulls today and cause some of the low fertility problems in bulls and are passed on to the sons and daughters and should not be tolerated.

These pictures are the findings of 35 years of research by James Drayson. A total of fifteen thousand bulls in the various research projects were regularly measured.

CAUTION I have seen many reports of semen with claim of 90-95% live sperm count. With James Drayson and Gearld Fry’s experience only about 5% of the total bull population has a count close to that figure. A red flag should immediately go up in your mind when you get that kind of report.

More detailed information can be found in the book "Herd Bull Fertility."